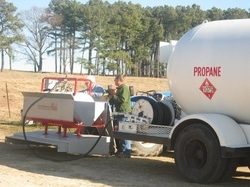 Are you one of the growers that are questioning the effectiveness of windrowing for disease and insect control?

The Red Dragon Poultry House Sanitizer attaches to the 3 point hitch on your tractor.
Moving at around ½ mile per hour, you are applying intense heat of between 1400 and 2050 degrees directly to your litter (or bare floor, after a total litter clan out).
The heat from the propane fueled torches under a safe insulated hood dries out litter and kills pathogens more effectively and reliably than chemical applications or windrowing. (See this article highlighting the Red Dragon Poultry House Sanitizer’s effectiveness in controlling Bird Flu in poultry houses.)

Flame sanitizing also kills darkling beetles, eggs and larvae in the litter of your poultry house. Growers who use the Red Dragon Poultry House Sanitizer (PHS) report a drastic reduction in the population of darkling beetles.

Growers that use a tiller or other means of stirring the litter like a Poultry Litter Rejuvenator (PLR) or Big E litter puverizer , and flame a second time say that stirring the litter makes it more porous and brings up more bugs to the surface. They then flame the litter again and decimate the bugs that are on the surface as well as further down in the litter. (See looking for bugs after flame treating poultry litter)
While the Red Dragon Poultry House Sanitizer is very effective at combating diseases, you can’t SEE eradicated dieses just by looking in the house. A visual measurement for how well the Red Dragon Poultry House Sanitizer works is how few beetles are alive after you flame.
Another benefit that you CAN detect just by being present in the house is the lack of ammonia in the air after you flame; even with the fans off.
Ammonia control is a great concern to poultry growers during the colder months.
How much money do you spend applying PLT, Clasp, A-7 or other chemical ammonia controls in your poultry houses? If you are wind rowing, you are probably applying much more ammonia control than you would if you weren’t windrowing.
During the colder part of the year, maintaining good air quality, and reducing run times on ventilation fans to conserve heat is really important. Good air quality ensures good bird health and lower flock mortality. Running the fans less reduces you power and heating costs, and keeping young birds warm helps with feed conversion. If you try to conserve heat by running your fans just a little less than you should; higher ammonia levels can impact air quality and flock performance dwindles. So could your settlement at the end of the flock cycle. What can you do?
The good news about flame sanitation is, for one; unlike windrowing, there is no waiting for the litter to reach the right temperature to kill diseases and insects. The heat of a poultry house flame sanitizer far surpasses the temperature needed to kill diseases and bugs, and instead of increasing the ammonia levels in the house, the ammonia levels can be reduced so low, they are barely detectable. This is a Godsend for organic poultry growers.
Poultry producers who use the Red Dragon Poultry House Sanitizer are reporting that they are using much less ammonia treatment as when they were just applying chemicals, or none at all, and those who have to windrow because their integrator requires it are using the flame sanitizer to knock out ammonia and save a bunch on chemical applications.
If you are thinking of using a poultry house flame sanitizer, consider these facts and compare with your current methods.

Welcome to the Fire Power for Your Farm Blog!

It is my goal here to share more of the finer details about the agricultural equipment we sell and the benefits of using it.
Feel free to comment, ask questions and let me know of the challenges and needs you have on your farm.
I hope the information you see here in this blog and on the rest of this website will help you find the solutions that will help you overcome challenges and make your job easier, more satisfying and financially rewarding.