Getting rid of darkling beetles! 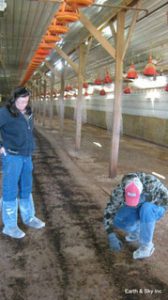 Back on July 15th 2013 I did a post titled “Poultry House Flame Sanitizing – How Deep Will It Heat?” Featured in that article is a heat depth video showing the litter temperature on the floor of a commercial poultry house after flame sanitizing.

When I am at a poultry farm training growers on how to use their new poultry house sanitizer; Just about every time, almost invariably, I see a knee touch the litter and an index finger digging around in the litter and eyes intently looking for dead bugs.

Okay, there’s a lot of heat.
So what does it do? 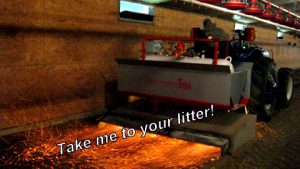 It only makes sense that if you apply heat surpassing 1200 degrees Fahrenheit to the litter in a poultry house  that the beetles will loose and the heat will win. (Photo left: poultry house litter cooling after the sanitizer has passed)


Here is a video of a couple of poultry farmers doing a litter check after they used their poultry house sanitizer.

“With flame sanitation there is a lot less time, effort and expense than there is with wind-rowing chemical treatments or replacing litter.”

It takes about an hour or so to flame sanitize an average sized poultry house.
In that time you can eliminate a whole bunch of darkling beetles while simultaneously flaring off ammonia, drying the litter and killing off the pathogens that might be killing your birds.
With flame sanitation there is a lot less time, effort and expense than there is with wind-rowing chemical treatments or replacing litter.
Interested?
Call us. We’re here to help!

Welcome to the Fire Power for Your Farm Blog!

It is my goal here to share more of the finer details about the agricultural equipment we sell and the benefits of using it.
Feel free to comment, ask questions and let me know of the challenges and needs you have on your farm.
I hope the information you see here in this blog and on the rest of this website will help you find the solutions that will help you overcome challenges and make your job easier, more satisfying and financially rewarding.